Mary Badaracco: In Her Daughter's Words 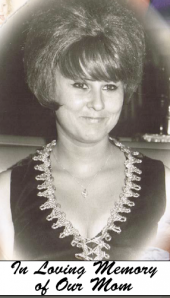 My life was shattered 24 years ago. My mom,Mary Badaracco, vanished from her home. Yes I did say 24 YEARS! The last person that saw my mom alive, her husband of 14 years, STILL HAS NO COMMENT! This man, our ex stepfather, TOLD US TO "TELL NO-ONE and DO NOT GO TO THE COPS". He told us his lawyer would handle it, however...the only thing his lawyer did was slither into court and enter a motion for divorce on the grounds of desertion, only 9 days after mom supposedly disappeared, without reporting her missing. Meanwhile, he already had his mistress moved into my mom's house.

About 10 days had already passed by the time I was finally told that my mom had supposedly "taken off" on August 20, 1984. I knew right away something was terribly wrong, I knew our mom would have never "taken off", not after all we'd been through together! I was also told her car remained at her home, a smashed windshield was evident, I suppose only to me, that foul play should be suspected as it was in the driveway, damaged.

So I, (as usual) defied his orders and convinced my sister, who was still in a state of shock from being told the previous week by this ex family that our mom was missing, my only sister,who was told to especially not tell me that our mom was gone. Why would she comply? I feel she was scared to death that our worst nightmare

had come true! The day had come that they went too far and really hurt our mom! Once I knew I told my sister that we must run, not walk, to the police!

Throughout our moms 14year marriage to this man, she also raised all 4 of his kids. We were subjected to much domestic abuse from these sickos. By the time mom realized this, she didn't have a clue how to get away from him! Several times after he'd beat our mom severely we'd flee the home and stay with friends only for him to eventually find us and bring us back to that house, usually by threats and force, or as in one instance, having our Grandma by knife point, while my sis and I could only run and hide under the bed and cry.

Back in the 60's and 70's she never reported this to police. Why would she? He is friends with the cops, he still is friends with people in high places, that's why this case is not solved!

One crucial error the state police made is regarding our moms damaged car. The CSP investigator 1st on scene was "D B's" buddy. They believed him when he told them "the bitch took off and stole my money, too". He told one cop that mom broke the windshield of her car that was left at her house, but he was overheard telling another trooper that he did it! Although I kept asking about the car for over 20 years, I was like a frikken broken record. I insisted the police find this car, I knew it was a key piece of evidence! The police told me to find the VIN number and they would run a search, even though I later found out they, of course, had mom's license plate number the entire time. " D B" got rid of her car and was never even questioned about the whereabouts of this car!

We have had our 1st arrest in all these years. A new state trooper has uncovered much information that has been concealed from us. (a relative of "D B" ) It's only a misdemeanor charge. I thought it was a start. This man is accused of interfering with a homicide investigation.

We believe he buried moms car according to what police learned while interviewing this suspect. A huge excavation took place, 3 cars were recovered, unearthed from this mans backyard, but mom's car was not found. The suspect was scheduled to be in court Dec 5th to possibly accept a guilty plea and a $250 fine and
wow- that's it! Why are we sending the message that it's ok to lie to state police investigators, you will basically just walk away!

As mom's belongings were completely removed, not even a link ball remained of her. In her house, the day she "WENT MISSING" in1984, her belongings, as well as her remains, could be in that car! A few weeks back when the prosecutor told me they were just going to plea him out with that fine, I let him know how unhappy I was. I told him "D B" carries that in his left pocket daily, who is that going to hurt?

I then decided I'd go to the court to see this for myself. However, his lawyer felt the need to pull something shady. On the morning of court last month, supposedly the day of this final continuance, after I drove almost an hour, his lawyer called in (after 9:30 am) and said they needed a new date as she has another murder case somewhere else and can not be there to represent him. I was so furious because this attorney had almost 2 months to get her calendar straight! I immediately asked to speak with the judge and my wish was granted, in her open court with the accused to my right!

I suppose I watch too much TV because I thought my request would be a discussion, privately, in chambers! This was one of the hardest things I'd ever done, trying to be mom's voice in a court of law for the very first time in 24 years, I pleaded with the court to impose the maximum sentence!

I keep hoping and praying that one day, someone with ovaries/testicles will truly hear my story, realizing something must be done, stand up beside me and help me fight this evil.

Believe me, if I had ANY money, I would certainly have been paying for justice for my mom. I can only use every fiber of my being to right this wrong. I've tried to make this broken justice system work for my mother, my family! Something is seriously wrong when killers are allowed to get away with murder.

In my case, not only do we know in our hearts who killed our mom, but they hid our moms remains somewhere. What kind of a monster does that! He also made my mother quit claim her home to him for $1 about 6 weeks prior to her disappearance, and he still resides in mom's house with his mistress, now wife. He took the home out of OUR moms name and gave it to his 3rd wife.

I only want this case solved! The tragedy that happened to my family so long ago threw my sister and I into a state of shock we still feel to this day!

We have been left shattered, still trying to put the pieces of ourselves back together. We thought this was supposed to be moms time for working so hard raising 6 kids and putting up with all the abuse all those years! 6 kids were grown and out of the house, this was supposed to be her time to enjoy life! But mom found out about the affair, and we believe she finally wanted out,like this was the last straw.

This family took everything from us, our childhoods, our mother and even now he takes from my life!

He (and those that keep his secret) also killed a part of me that day too. I have never been the same since my world was shattered in August 1984! My mother was the most beautiful spirit, she was always there helping anyone that needed anything! To further my pain and suffering,authorities made so many mistakes. I've pushed and screamed to be my mothers voice all these 24 years and now I'm being told that even this old state police trooper buddy has lawyered up!

We know that there are people within the community, as well as several persons of interest that do have the missing puzzle piece that we need to solve this case.

I struggle every day to get out of bed to fight for what's right ! Until I know exactly what happened to my mom and I know we've done everything possible to locate her remains, I will be tortured by this ongoing tragic event that occurred in 1984. I can only best describe this daymare as...my mom cries out to my spirit

I have been a wife and mom of 4 for 27 years. I am busy, but the disappearance and
unsolved homicide of my mother, well, it is just there with me every single day, I feel the loss of her beautiful presence.

I ask why have I been tortured by this for so long? Because my state has allowed this crime to go unsolved all these years. I continue to fight for my mom and those that I didn't even know, others that are missing. On behalf of my children, my goal is to show my kids, my nephew and my family that justice really does exist,decent people really do care!

Please join me in a prayer that all of our missing loved ones will be returned to us. Pray that our lawmakers will assist us in making tougher laws. If society no longer knows the difference between right and wrong, then it is our obligation to remind them with a few more laws !

Please feel free to visit this daughter's promise to her mother...to NOT let people forget! www.marybadaracco.com

Not sure how to contact you! I have been looking up a separate case of a Jane Doe found in my hometown of New York. I use google image and I came across your mother's picture that just happened to be next to a pic of a Jane Doe that was found washed ashore of Lake Overholser in Oklahoma. I have no knowledge of any of the cases but just thought the clay figure that they put together looks very much like your mother. They believe the jane doe was between 20-45 years at her death. My email is SarahMrsAndrews@aol.com. I do hope you find out what happened to your mother!! God Bless!